Frank Iatarola was ahead of his time. In 1959, he owned a grocery store in Melrose Park, Illinois, and – in the early tradition of “residential above retail” – Frank and his wife Betty lived and raised their eight children in the apartments above the store. But Frank also had an eye for real estate. As he saw growth in the northwest suburbs, he and his family and friends acquired over 200 acres of farmland near the intersection of State Routes 59 and 72, in what is now Hoffman Estates.

At that time, the nearby interstate highway (now known as the Jane Addams tollway) was brand new, and substantial development would not occur in the area for many years. For decades, the land was farmed and Frank and his family even grew some of their own produce on the property. Over the years, the surrounding area developed, including the development of Sears world headquarters at nearby Prairie Stone.

When Frank, his son Anthony, and their partners sought in earnest to develop their property, they engaged Matt Norton, new Firm real estate and municipal law partner, to guide them forward. In 2004, Norton assisted the owners in the annexation and zoning of 68 acres in Hoffman Estates; 42 of those acres were developed with the Target-anchored Poplar Creek shopping center at State Routes 59 and 72.

Now, nearly 60 years after Frank and his partners acquired the property, Norton has assisted the owners (led by Frank’s son Anthony), in obtaining zoning and other master development approvals from Hoffman Estates for the 185-acre “Plum Farms” development, a mixed use project that will include over 1,000 apartments, townhomes, and single-family homes, and at least 155,000 square feet of retail and other commercial space.

The Plum Farms project offers a housing mix that includes what city planners have described as the “missing middle” in Hoffman Estates, Barrington, and surrounding areas. “The area lacks new-construction housing options that are attractive to young professionals seeking their first “real” apartment or home, and to down-sizing baby boomers who want to stay in the area, but can’t find the high quality, smaller dwelling spaces they desire,” says Norton. “These include courtyard-style apartments, smaller single-family homes, townhomes, and live-work spaces.” In addition, the innovative zoning and design guidelines and standards for the project are based on a “traditional neighborhood” concept that calls for connected, walkable neighborhoods constructed on a city-like grid pattern and encourages design elements that foster neighbor interaction, such as smaller lots, front porches, multiple common green spaces, and walking paths that take advantage of the existing natural wetland complex in the middle of the property. The commercial component is likely to include apartment living above first-floor residential space, and amenities such as an ice rink and public plazas. The design standards will compel high quality design and materials.

The housing mix and overall development framework requires a higher density than has been seen historically in the area, and therefore a rethinking of zoning philosophy. Norton assisted the owners in negotiating the annexation and development agreements, zoning ordinances, and other development approvals necessary to make the Plum Farms project possible.

All the hard work paid off. After many public meetings and hearings, the necessary agreements and ordinances were unanimously approved by Hoffman Estates Village Board members on May 1. “It has been a tremendous honor for me to represent the owners of these properties and to help bring them closer to realizing their vision, which started with Frank in 1959. That is the part of my job that I enjoy the most,” said Norton. 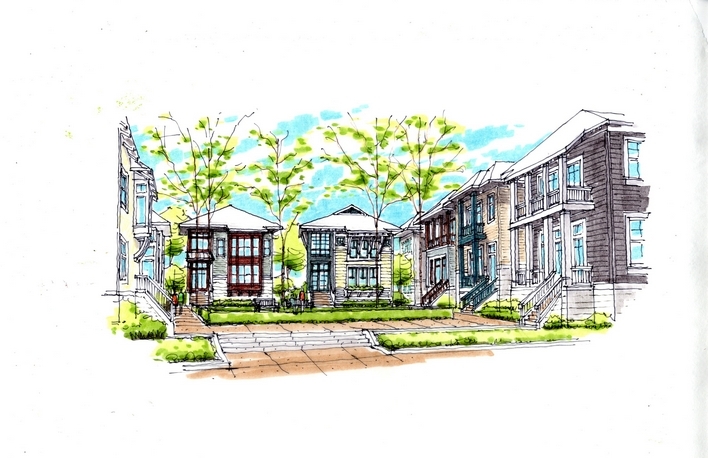 Matt Norton brings more than 25 years of experience to the Firm and to Firm clients. Matt specializes in real estate development, local government matters, and urban revitalization.  His practice includes obtaining approvals for owners and developers of real estate throughout the Chicago metropolitan area, including zoning and planned unit development approvals and annexation and development agreements.

Matt assists both public and private sector clients in the creation of tax increment financing districts to incentivize the redevelopment of blighted areas, including downtown revitalization projects.  He recently acted as special counsel to the City of Chicago, in the creation of a north-side tax increment financing district that will partially finance the CTA’s “Red and Purple Modernization Program,” the largest TIF district ever created by the City. He also counsels the firm’s clients in creating and obtaining other local government incentives, such as special service areas, sales tax sharing agreements, property tax abatements, and other incentives.