Representatives of a company planning to redevelop Homewood’s Calumet Country Club for warehouse-distribution uses said Thursday that buildings as tall as 80 feet could be built, but efforts would be made to screen the property from nearby homes.

More than 30 people protesting the project scoffed at claims by representatives of Diversified Partners, which bought the golf course last year, that the development would have minimal impact on property values or quality of life for residents living near the site.

Homewood’s Planning and Zoning Commission heard three hours of testimony Thursday night and some public comments, and continued the meeting to 7 p.m. Wednesday.

The commission is being asked, among other things, to rezone the property northwest of 175th Street and Dixie Highway to allow for construction of as much as 800,000 square feet of industrial space.

The developer is projecting about 350 inbound and outbound truck trips daily, along with hundreds of other vehicles belonging to people who would work at the logistics park.

The facility would operate 24 hours a day, seven days a week, according to Diversified. About a third of the property would not be developed, partly to provide stormwater runoff detention and to preserve land in and around Cherry Creek, which runs along the north side of the site.

Residents of the Governors Park neighborhood directly south of the golf course are concerned about truck traffic and pollution, and fear the development will sink the values of their homes.

Many of those attending the meeting are part of a newly formed group, South Suburbs for Greenspace over Concrete, which is trying to block the development.

Diversified paid $3.3 million for the property, and a representative with a commercial real estate firm hired to evaluate potential uses and market the site said there was no interest from possible retail, office or residential developers.

Retailers were not interested, partly due to the large amount of existing retail space along Halsted Street in the village, and residential developers didn’t see the site as being attractive due to noise from Interstate 80 directly north of the golf course, said Jason Lev, a senior vice president with CBRE Group Inc. 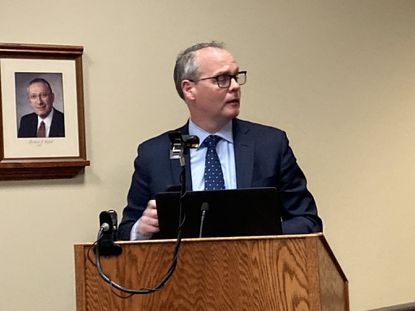 The golf course had, for the last several years, averaged annual losses of about $200,000, and it was not financially feasible to continue operating the country club, said Matt Norton, an attorney for Diversified.

“The golf market is not what it once was,” he said.

Norton said there are “no viable open-space uses for the property,” and that the redevelopment, in Diversified’s view, wouldn’t diminish property values in the surrounding area.

He said the project would not be detrimental to the health, safety or welfare of its neighbors, an assertion that drew jeers and shouts of “garbage” and “lies” from residents.

Norton said a benefit of the development would creation of about 1,000 jobs, although some protesters derided them as being low-wage positions lacking benefits such as health insurance.

“There are zero (jobs) there now,” the attorney said.

Before the sale last fall, owners of the golf course had filed a lawsuit in July 2019 in Cook County Circuit Court to disconnect the property from Homewood, 116 acres of which are in Homewood and about 12 acres in Hazel Crest.

Homewood officials late last month agreed to settle the lawsuit and create a tax increment financing district for the property, realizing the village had little chance of successfully blocking the disconnection in court.

It was believed the property, once detached from Homewood, would then be annexed by neighboring Hazel Crest, which borders the golf course on three sides. The country club was founded in 1901 and annexed to Homewood in 1980.

In a video posted to the village’s website Wednesday, Homewood Mayor Rich Hofeld said that “one way or another this development was going to happen,” and that by keeping the land in the village, that gives Homewood some control over what is built.

“This is making the best out of a bad deal,” he said.

Hofeld said that the village had also contacted the Cook County Forest Preserve District and The Nature Conservancy about possibly taking over the property to keep it open space, but they had no interest.

“A distribution center is not what we wanted to see on this site,” he said.

A tentative layout of the site shows two buildings parallel to 175th Street — four buildings are proposed on the property — and there would be a minimum setback of 100 feet from the street, with a berm along the north side of the road to help screen the property from nearby homes, said Drew Walker, a project manager with engineering firm Kimley-Horn, hired by Diversified.

The truck parking lot would be at least 6 feet below the top of the berm, Walker said.

Also, Diversified would be required to increase the setback for every foot of any building’s height above 50 feet, he said.

The developer is proposing three access points for trucks and other vehicle along 175th, and would build a right-turn lane from the ramp leading from I-80 to southbound Dixie Highway as well as a deceleration lane from Dixie on westbound 175th to the first driveway.

About 12 acres of the property on the eastern edge of the golf course, along Dixie Highway, are in neighboring Hazel Crest.

Depending on future negotiations with that community, a second phase of the development could include a gas station as well as access into and out of the logistics park off Dixie, Norton said.

One Planning and Zoning member, Dexter Johnson, asked Diversified representatives whether a noise study had been undertaken, questioning “how effective will berms be with three big driveways.”

“We can’t do a noise study on a development that doesn’t exist,” Walker said.

Norton said the berm is intended more as a visual barrier, but Walker said that once the site is developed, if it is found to be in violation of village noise regulations, that would need to be addressed.

Diversified would receive $1 million from Homewood only after the village rezones the golf course to allow the distribution development, establishes a tax increment financing district and finalizes a redevelopment agreement, according to Chris Cummings, Homewood’s village attorney.