For several years, we have stated in this year-end article that there were not significant changes to the individual income tax provisions during the preceding year. 2018, however, is different. In December 2017, Congress passed, and the President signed the Tax Cut and Jobs Act (the “Act”) making significant changes to the tax laws, including provisions related to individual taxation. Most of these changes became effective in 2018. 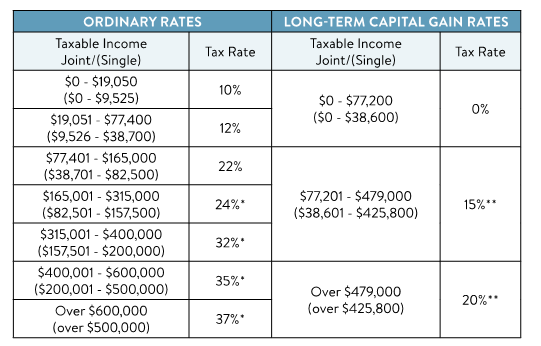 Revenue Raisers in the Act

Reduced rates and the increased standard deduction benefit all taxpayers. However, to help pay for some of the costs associated with these benefits, the Act eliminated the personal exemption and reduced or eliminated several popular deductions.

Previously, taxpayers could claim an exemption for themselves and each of their dependents. In 2017, the exemption amount was $4,050/person. For a family of 4, that equated to a reduction in taxable income of $16,200. Beginning in 2018, the personal exemption has been eliminated.

Some states have already enacted legislation to counter the effectiveness of the cap on deductions for state and local taxes. Beginning in 2019, New York and New Jersey will introduce programs wherein individuals can contribute to newly created state charitable funds (for which they could claim a federal charitable deduction) and, in turn, will receive a credit that they would utilize to offset their state tax obligation. The Internal Revenue Service has already stated that they will be issuing regulations to curtail efforts to get around the cap on the deduction for state and local taxes.

In 2016, the provision allowing individuals age 70½ and older the ability to distribute up to $100,000 annually from an IRA to a charitable organization was made permanent. By distributing funds directly from your IRA to charity, the distribution is not included in the account owner’s taxable income (and the account owner is not allowed to claim a tax deduction for the charitable contribution). The IRA Charitable Rollover remains available after passage of the Act.

The Act limits the deduction for interest incurred on home acquisition indebtedness to $750,000. Previously, homeowners were allowed to deduct mortgage interest on up to $1 million of home acquisition indebtedness, although the $1 million limitation continues to apply for loans that were in existence at time of the Act’s passage. Beginning in 2018, the previous deduction for interest on up to $100,000 of home equity indebtedness is no longer allowed.

Other Provisions of Note

The Alternative Minimum Tax was not eliminated, but the AMT exemption amount was increased to $109,400 for married couples ($70,300 for single filers). Also, these exemption amounts are only subject to phase-out for married couples with adjusted gross income of more than $1 million ($500,000 for single filers). This, combined with changes to the itemized deductions rules, should result in fewer middle-income households being subjected to AMT. The AMT will continue to be an issue for high-income taxpayers.

The Act eliminates deductions for alimony payments required under divorce or separation agreements executed after December 31, 2018. Alimony recipients will no longer have to include alimony in taxable income. The Act’s treatment of alimony payments also applies to divorce or separation decrees that are modified after December 31, 2018, if the modification specifically states that the new treatment of alimony payments now applies. For individuals who must pay alimony, this change may be expensive. Child support payments remain non-deductible by the payor.

The generation-skipping transfer (“GST”) tax is still in place. Generally, the tax applies to lifetime and death-time transfers to or for the benefit of grandchildren or more remote descendants. For 2018, the rate is a flat 40 percent. The tax is in addition to any gift or estate tax otherwise payable. As with the gift and estate tax, each taxpayer is allowed an $11.18 million GST tax exemption for 2018.

Many clients utilize a portion or all of their gift tax exemption by structuring long-term GST exempt trusts benefiting multiple generations. Such trusts will remain exempt from all gift and estate tax as long as the trust remains in existence. Under Illinois law, such trusts can last in perpetuity, thereby allowing you to create a family “endowment fund” for your children, grandchildren and future descendants.

In 2018, you may make a gift of $15,000 to any individual and certain trusts without any gift tax consequences. Married individuals may make gifts of up to $30,000. Gifts may be made outright or in trust and may be in the form of cash, securities, real estate, artwork, jewelry or other property. Giving property that you expect to appreciate in the future is an excellent way of utilizing your annual gift tax exclusion because any post-gift appreciation is no longer subject to gift or estate tax. To take advantage of the gift tax annual exclusion for 2018, gifts must be made by December 31. Gifts over $15,000 or gifts that will be “split” between spouses must be reported on a gift tax return, which must be filed in April 2019. The annual exclusion amount is expected to remain at $15,000 in 2019, $30,000 for married couples.

Payment of Tuition and Medical Expenses

In addition to annual exclusion gifts, you may pay tuition and medical expenses for the benefit of another person without incurring any gift or GST tax or using any of your gift or GST tax exemption. These payments must be made directly to the educational institution or medical facility. There is no dollar limit for these types of payments and you are not required to file a gift tax return to report the payments.

Interest rates are rising, but they are still at historically low levels. Low interest rates enhance the benefits of several gift and estate planning strategies. One such strategy is the “grantor retained annuity trust” or GRAT. A GRAT is an irrevocable trust to which a donor transfers property and retains the right to receive a fixed annuity for a specified term. At the expiration of the term, the property usually passes outright or in trust for the benefit of descendants or other named beneficiaries. The amount of the gift resulting from the transfer of the property to the GRAT is the present value of the remainder interest that passes to the beneficiaries at the end of the term. Under the valuation methods adopted by the IRS, the lower the interest rate at the time of the gift, the lower the present value of the remainder interest and the smaller the amount of the gift that must be reported to the IRS. Interests in marketable securities with high growth prospects are often ideal properties to transfer to a GRAT. While there has been considerable discussion about disallowing “zeroed-out” GRATs and requiring a minimum GRAT term of 10 years, Congress has not taken any action in this respect. As a result, GRATs remain a very attractive planning opportunity.

Example –Individual funds a GRAT with $1 million. The GRAT’s term is 5 years and its assets appreciate at a rate of 6%. Assuming the applicable IRS interest rate is 3.6% (the rate in effect for November 2018) and the GRAT is “zeroed-out”, the remainder value of the GRAT assets at its termination would be approximately $86,000. In other words, the GRAT structure would have allowed the individual to transfer assets valued at approximately $86,000 to his children or designated beneficiaries without incurring any gift tax obligation or utilizing any of his or her lifetime exemption amount. If the assets inside the GRAT were to appreciate at a rate of 8%, the remainder available to the trust’s beneficiaries would be approximately $166,000.

Low interest rates also make sales to “defective” grantor trusts more attractive. Under this strategy, a taxpayer creates a trust, typically for his or her spouse and descendants. The taxpayer then sells assets to the trust taking back a note requiring the trust to repay the taxpayer in installments. The trust is structured so that it is ignored for income tax purposes, resulting in no income tax consequences upon the sale. The interest paid on the note is typically at the applicable federal rate in effect at the time of the sale. The lower the interest rate on the note, the greater the amount of assets that will accumulate in the trust free of estate, gift and GST taxes.

For more information, please contact Greg Winters at 312/840-7059 or gwinters@burkelaw.com.